We started our day yesterday in Valentine and, upon checking the forecast for the day and our destinations, decided it was best to make a stop at the local Shopko before heading out of town. The store was going out of business and so we got winter gloves and hats and long socks at 70% off. Score!

The first stop marked on our atlas was Toadstool Geologic Park but there were several tiny towns to pass through on our way west on highway 20. One of which was Cody Nebraska. Noteworthy because when I was 3 years old I lived there. It was my dad’s first teaching jobs out of college. I texted both my parents asking if they remember what the name of the street our house was on. Neither remembered but both provided the same turn by turn directions and which corners the houses were on. That’s right.. I said “houses”. Apparently we lived in two which were situated on opposite corners of the same intersection. Considering there are only like 40 houses in the entire town, that’s impressive.

I took pictures and both my parents confirmed the one was definitely the second house we lived in, though it wasn’t yellow then.

Today the population is about 154 people and the entire place looks like it was last loved back when I was 3 (in 1976). The school is still there, amazingly. We only lived there a short time before moving further east to Scribner Nebraska where my dad had his second and last job as a teacher. He only wanted to be a HS teacher so he could coach some sport. Apparently his distaste for teaching was stronger than his love of sports because we only lived in Scribner for a year before he abandoned all that and we moved back to Council Bluffs where my grandparents were. He never taught again.

Somewhere along highway 20 the temps dropped to 33 degrees and the rain turned into snow/sleet mix. We got as far northwest as we were going to go on the highway and then turned onto an unpaved road. It would be 19 miles to Toadstool Geologic Park and this time, I was in the drivers seat. It was slow going, with snow and slush gravel and water pooled everywhere and no way to tell how deep the ruts or puddles really were. That 19 miles took us about 50 minutes. Near the end, I almost gave up. It wasn’t that I felt we were in danger, not like other times in my life when I was afraid of the car going off the side of a steep cliff. No, this was more of a dull fear of getting stuck and being stranded and waiting for hours and hours for a tow truck in the middle of nowhere.

Interestingly, I felt slightly better about the whole thing than I did the day before when Jim was driving. No doubt in my mind that this road was way worse, but there is something about being in control that eases the mind a bit. I could speed up, or slow down, or turn the wheel as my reflexes demanded and wasn’t holding my breath or clenching my jaw nearly as much. Jim was very supportive and encouraging and we made it. I knew once we were there, that was it for me driving that road. I got us there, he would have to get us out.

The next step of our little day 2 adventure would be attempting to explore the park. He brought big rubber boots for us both and we donned the supplies we purchased that morning. The story would not be complete without me mentioning that I thought I could go without the boots and we went about a quarter mile before turning back to the car so I could change. Part of my issue were that the boots were not meant for me and they were quite large. Size 8. Well, actually size 8 and 10 and 11. He threw what he thought were matching pairs into our chariot when we packed up to leave without realizing that he did not, in fact, have matching pairs.

So I wore one 8 and one 10 and he wore the other 10 and the 11 and he also had two left feet. None of that mattered much because 1.) We were out in the middle of no-where with no other human beings within probably 30+ miles and 2.) When it’s cold and wet and muddy and you just need protection for your feet, anything would do. They were actually perfect for the task.

The trail was supposed to be a self-guided. From where we stood, there was no trail. Everything was covered in snow and there were only little streams cutting through the area to provide any sense of which way one could go to get around the rocks and hills rising up at steep angles. I knew something glorious was on the other side. Some Pulitzer Prize winning photo op or other life-altering view. We tried to go one way and got blocked when the path became too steep and too narrow. We doubled back to the base of a larger stream and went the other direction. Arriving back near the start of the so-called trail, we spotted some wood posts sticking out of the ground in various places, and figured that was supposed to be the trail and we tried to follow that.

After two or three posts I was certain that the rushing stream we were criss-crossing over again and again WAS the trail. The scenery around us was beautiful and also quite not what I expected. Of course I didn’t expect snow covered trails on May 21st. I had this picture in my head of the Badlands of South Dakota and I had imagined it would be something like that. Perhaps it is, but not right now.

We explored around for a while and came to the edge of what was humanly passable under the conditions. I followed the stick markers up and around a bend and got to a place where I could see the next one, but there was no way I could find to cross over the ravine to the other side. Again, I supposed if it was dry and it was just rocks, you could climb down and up again, but it was slippery and muddy and wet and my fingers were beginning to freeze.

It’s an interesting phenomenon that despite my freezing fingers, I continued to take my hands out of my pockets to take pictures with my phone. That means that I would rather risk the freezing cold gnawing at my flesh than miss that one picture that I somehow felt was monumentally important. One of about 100 pictures I took that afternoon of course.

The cold getting into my bones was eventually what made me decide to call it done. We backtracked the way we came and eventually got back to the car where I promptly took off my mismatched boots and climbed into the passenger seat and cranked the seat heater as high as it would go. The drive back was still stressful, but I was warm and satisfied with our time at Toadstool.

The rest of the day can’t quite compare to that. We drove a little more west and south and wound our way to Alliance Nebraska, home of the world famous “Carhenge”. By then the snow had gotten worse and the highways were covered in slush and ice. Jim had never been to the spot of painted and stacked cars in a formation similar to the rocks in England so we made a stop there.

As one might imagine, with the blowing cold and snow approaching blizzard status, we didn’t stay long. I tucked myself behind a car to block the wind and took a few pics of the area. I had been before, with Matt, and that made my desire to stay anymore than absolutely necessary quite minuscule. I would have stayed for as long as it took for Jim to be satisfied with the experience. As it was, we were in and out in about 15 minutes.

The Holiday Inn Express was our resting spot in Alliance and when we arrived we cranked the heat up, laid all our wet socks and shoes across the heater, and drew the shade on the window closed. No need for a view of the highway and a reminder of the freak May snowstorm that had become the focus of our journey instead of just something noteworthy along the way. Instead of looking at the map and asking what was there to see tomorrow, I found myself putting tomorrow’s destination into the weather app to check the forecast. 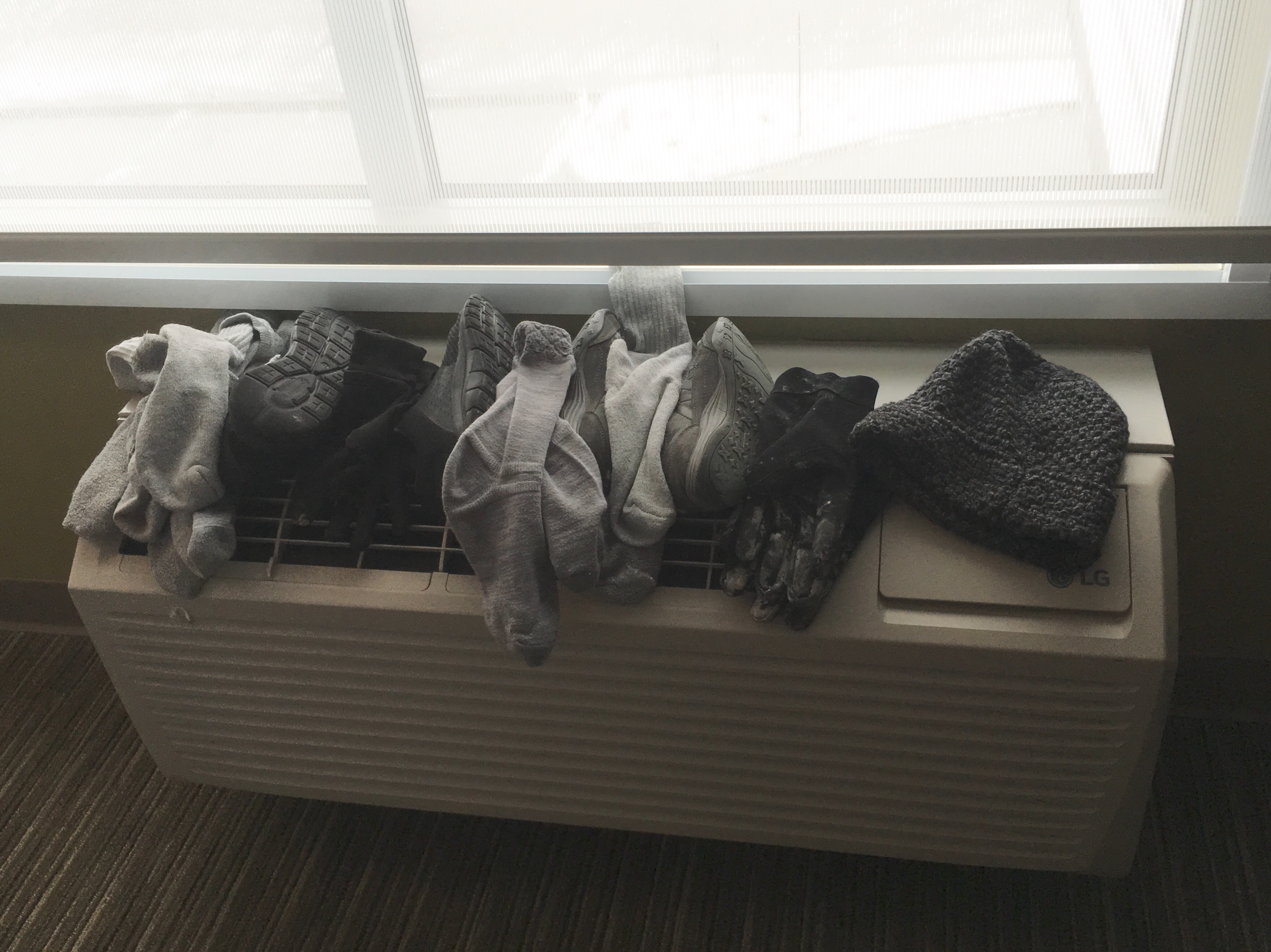 Next Stop.. warmer temps and blue skies over Kearney,